Session Recap: Rabbit Masks, Torture, and The King In Yellow

After a long break because of the extreme heat, we're finally back on our old shit. And this actually turned out to be the final session of the Mosna campaign (which we hadn't planned, but it was such a perfect ending that we decided to call it there). Next week I'll be running a Call of Cthulhu 2nd Edition one-shot, and soon we'll be starting a Traveller campaign that E is running.

But anyway, one with the story:

We picked up where we'd left off. Asenath passed out upstairs in bed with Julianne after the fistfight with the Roughnecks, Felicity asleep in a chair, depressed during the wake. While they were asleep in the early morning hours, the Roughnecks snuck into the house. Most of them wore rabbit masks, and the leader wore a fox mask. They were all armed (the grunts with sticks, a few higher-ups with knives and swords), and they knocked Felicity and Isidor Wake out cold so they couldn't interfere. They crept up the stairs and grabbed Julianne out of bed and knocked her out, which woke up Asenath.

Naked and tangled in the bedclothes, Asenath found herself surrounded by eight men in masks. She tried to grab her knife from the bed but fell over the bedclothes and ended up on the floor. Two men grabbed her by the wrists and ankles. She squirmed out of their grasps and then the big guy who had grabbed Julianne dropped Julianne's unconscious body onto the floor and grabbed Asenath, putting her in a headlock and dragging her towards the window. She screamed her head off to no avail, because - unbeknowst to her - all of her allies in the house were unconscious. Another man opened the window, letting in the rain that was pouring down. The big guy dangled Asenath out the window, and she decided to take a risk to try to get away. She twisted at a sharp angle and redirected the momentum, flinging the big guy out the window. He managed to grab hold of her by her ankle and drag her out of the window with him.

The big guy split his head open on the muddy ground, and Asenath broke her right leg badly - bent backwards entirely, the bone sticking out of her knee at a sharp angle. She tried to get up, but could barely move from the pain. The leader of the Roughnecks slit Julianne's throat and threw her body out the window. It landed next to Asenath, face-to-face. Asenath heard the Roughnecks shouting as they came down the stairs, and managed to push through the pain and limp to the gate. The gate was tied shut with a leather thong that Asenath was struggling to untie because of how slippery everything was because of the rain and the blood and the mud.

The Roughnecks came out of the house and caught Asenath while she was still fumbling with the gate. One of them kicked her in the back of her ruined knee and she fell slumped against the gate, nearly passing out from the pain, while half a dozen men brutalized her with sticks.

Some time passed before Felicity woke up. She found herself tied to the bed in Asenath's room, her wrists restrained with silk scarves, her dress in tatters, while the man in the fox mask rubbed his crotch, preparing to rape her. When he realized she was awake, he told her that it would be more fun this way. Felicity refused to speak, and instead tried to escape the bonds, but accidentally tightened them while trying to slip out. The man in the fox mask laughed and climbed on top of her, holding her down by her throat. She kneed him in the balls, and the man fell back in pain. She tried to grab one of the knives strapped to his chest with her toes but failed, then managed to slip out of the scarves before the man in the fox mask recovered.

Felicity grabbed Asenath's hunting knife from the desk and lunged at the man in the fox mask. He easily disarmed her and knocked her down onto the bed, pressing his body against hers and pressing his dagger to her throat - a thin cut that bled lightly. When Felicity saw the blood, she panicked, and started screaming, flailing, she hit the man in the fox mask in the face without realizing it, and dove into the closet to get out of the way. The man in the fox mask came after her, trying in vain to grab her while she pressed herself against the back wall of the closet. She found Asenath's two-handed sword in the closet and wrestled it out of its scabbard, but with her right hand broken, she could barely lift it, much less fight with it.

The man in the fox mask slid the closet door completely open, then hit Felicity in the throat, incapacitating her momentarily. He grabbed her and drug her back to the bed, opened his pants, and was about to rape her, when she grabbed hold of his dick and tore it off with her good hand. The man in the fox mask fell back, bleeding out, and Felicity tackled the corpse, shoved the severed dick into the hole she'd created, and generally played with the corpse and the blood. Drawn upstairs by the man in the fox mask's screaming, eight Roughnecks came up the stairs, but panicked and ran when they saw what Felicity had done. 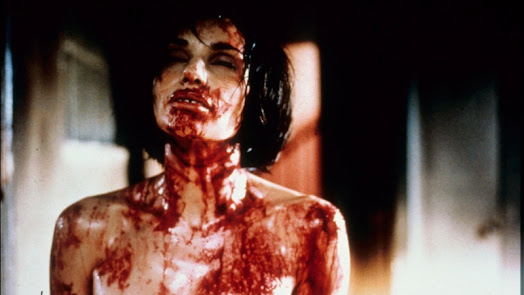 Felicity brushed herself off and put on one of Asenath's work shirts (which was big enough to be a dress on her) and grabbed Asenath's hunting knife from where it had fallen on the floor. She heard a gunshot downstairs and snuck down to see what had happened. She found Isidor Wake in his chair with a bullet through his head, and the house empty, gunned down by one of the Roughnecks while they were leaving, since he was the only non-Felicity witness to what they'd done.

Felicity grabbed her backpack from where she'd left it under the chair the night before and stumbled out into the rain, barefoot and blood-drenched. In the front of the house, she found Asenath's body tied to the gate, her back split open all over the place from being beaten with sticks, her face bruised and swollen, bites taken out of her breasts, and her anus and vagina covered in blood and semen. She vomited, then tried to open the gate when she calmed down. She couldn't itopen because of Asenath's weight against it, so she headed for the back gate.

From the back yard, Felicity heard an unearthly whistling as the rain slowed down. Despite her fear, she pushed on and found Porphyria in the backyard, where she had bloomed into a mass of fungus that grew two to three feet from her prone body, splitting her flesh, fungus that had begun growing in her uterus and spread outwards - the last gift of the Mi-Go.

Remembering all the times Asenath had helped her find her way back home, Felicity managed to make her way back to the Ooms mansion without any trouble. She took a bath, changed clothes, and packed, dressing for once to the full extent of her station (like a total absurd ostentatious noble) in hopes that it would help her avoid trouble. She got wandered, lost for hours, trying to find the train station, before finally asking an old woman who helped her find the station, overcoming her paranoia that the Roughnecks were coming after her.

Felicity bought a ticket to Argenti and sat down to wait for the train, which was coming in an hour. She looked around in her backpack for something to read, and all she could find was a copy of The King In Yellow, which she decided to read despite the risk, since at that point she was basically in a state of "How could this day get any worse?" The first three acts were a fairly standard planetary romance describing courtly manners in Carcosa, but then Act 4 became a highly detailed depiction of the events of the morning - Asenath's torture and death, Felicity's near-rape, etc, etc, but with the added detail of an 'unseen watcher' who observed the events from the shadows. This made Felicity even more paranoid, and she started to think she could feel eyes on her, but kept looking around the station and seeing no one. Reading on, Act 5 described a potential future - murders on a train, human puppets suspended from the skies. Reading, Felicity was overcome by the realization that the world is a stage where human puppets perform for the entertainment of ambivalent alien gods. She began laughing uncontrollably, rocking back and forth. She was still laughing when the train left, and hadn't stopped by the time that the town watch arrived in the morning to arrest her for the murder of Ludomir Rabinov, the leader of the local gang of toughs known in these parts as the Roughnecks.

Popular posts from this blog

'Minimum Viable' D&D, and a handful of regular updates 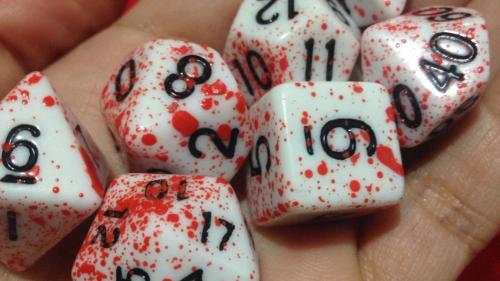 My wife (who has been referred to in the past as 'R' here) and I were at my parents' house for a few days over the holidays because of water outages in our apartment due to shitty-ass weather and I was craving D&D but didn't have any polyhedrals or books or anything with me, so I threw together the basics of a very simple version of D&D - like, what I'd call minimum viable D&D, designed for one-shot play pretty exclusively, with sessions being limited to maybe 2-3 hours. It just uses d6s, since that was all we had on hand. I even threw together a basic dungeon generator to mitigate the fact that I was too tired to write an adventure (and didn't have a notebook with me to write it in) and didn't have any modules on hand to run. I ended up not getting the chance to use it then - we had plans to play it the next day and then the water came back that night so we were able to go home and life went back to normal, but I'm fairly proud of what I th
Read more

Black Gloves and a Massive Pair of Scissors: A Couple of Tables for Giallo and PSX/PS2-style Survival Horror Characters 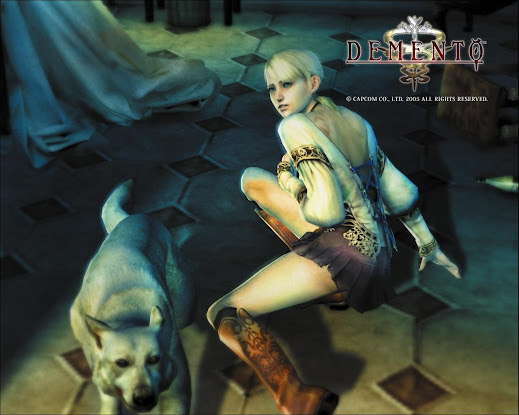 I started playing Remothered earlier tonight and it got me thinking about translating giallo and old school survival horror (especially stuff in the vein of Clock Tower, Haunting Ground, etc. - the slasher-type games) into an OSR context. I'm generally envisioning this in a kinda Haunting Ground-esque scenario, where the PCs have been drugged and abducted and are trapped in a location where they're being hunted by a killer who can easily overpower them, without any real knowledge of how they got there. That bit being unraveled in the course of play, of course. Maybe even amnesiac PCs who only remember fragments of their life prior to their abduction. That sort of general feel. The setting is anywhere between the 70s and the present day. I threw together a couple of tables for character generation, just some basic stuff to flesh out character concepts and the like.  Iconic Clothing Characters in this style typically have a distinctive piece of clothing. Fiona Belli's micros
Read more

Cool Shit From Other People